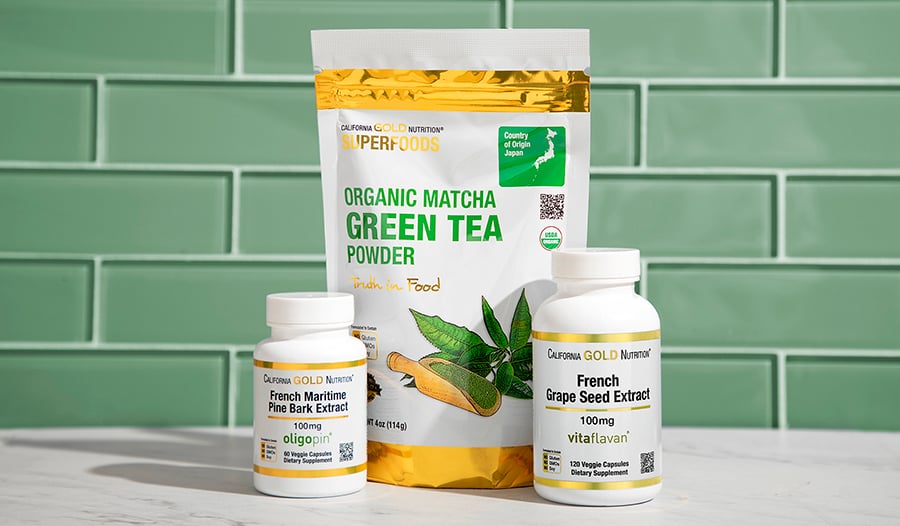 Polyphenols are a diverse group of compounds found in plants. Generally, polyphenols have strong antioxidant and anti-inflammatory properties. Common polyphenols include curcumin, resveratrol, and quercetin. However, numerous plants contain polyphenols, and some of the richest sources often touted for their benefits include green tea, grape seeds, and pine bark.

Long utilized as a health tonic, green tea has been the focus of research corroborating its potential health benefits. And while the polyphenols found in green tea aren’t the only compounds that appear to affect health, the data suggest they are a significant component. The main polyphenol that has been subject to the most research is epigallocatechin gallate or EGCG for short. A recent review highlighted the potential effects of green tea, including anti-inflammatory, antioxidant, and antimicrobial effects, along with benefits for heart disease and oral health.

The polyphenols in green tea likely also play a role in mental health. While still somewhat controversial, data does suggest that tea consumption lowers the risk for depression. A recent analysis exploring correlational data found that for every three cups of tea consumed a day, the risk for depression decreased by 37%. While direct intervention studies are needed, the current data still suggest that tea may improve mood.

Beyond mood, tea may also be helpful for protecting from the risks of cognitive decline, dementia, and Alzheimer’s disease. Multiple animal studies have found that tea displays properties for protecting the health of brain cells. The data is strong enough that one study stated that “green tea suppresses brain aging.” A dose-response study of the published data found that for every cup of green tea consumed per day, the risk for dementia was decreased by 6%.

While typically safe when consumed as a beverage in reasonable quantities, tea does contain fluoride, which, in large quantities, can cause fluorosis and bone damage. Generally, it’s recommended to keep tea consumption to five cups or less per day. In addition, supplements with purified EGCG have been shown to have potential liver toxicity concerns if consumed in excessive amounts. A review suggests that keeping EGCG consumption under 338 mg per day should eliminate most risks.

Grapes and grape seeds are another rich source of polyphenols that appear to have some significant health benefits. Like other polyphenols, grape seed extract has been shown to act as a potent antioxidant which may be related to its potential health effects.

Animal studies suggest that grape seed extract may protect against some of the long-term health effects associated with diabetes. Over time, as diabetes progresses, blood sugar levels increase. Elevated blood sugar leads to glycation, a type of tissue damage that can disrupt tissue function. Grape seed extract appears to help protect the nerves, blood vessels, and kidneys from this damage. In addition, grape seed extract showed potential for protecting the liver as well.

Similar to green tea, early data is also suggesting the potential benefits of grape seed extract for protecting heart health. The antioxidants found in grape seeds appear capable of protecting heart cells from free radical damage and blocking the oxidation of cholesterol. Cholesterol is much more of a risk factor for heart disease when it becomes oxidized and damaged. Animal studies also suggest that it can reduce the buildup of plaques in arteries, a leading cause of heart disease.

Due to their similar chemical structure, it should come as little surprise that grape seed polyphenols also have effects on brain health. While human trials for treating or preventing cognitive decline have focused on grape and grape juice, animal studies have shown protective effects from grape seed for both preventing and reversing aspects of cognitive decline and memory loss.

A study examining the mechanisms behind the brain health benefits found that grape seed extract was able to change levels of proteins implicated in cognitive decline and dementia. The authors concluded that the extract has significant brain-protective properties.

In addition to protecting from memory loss, grape seed extract may also help improve mood. A study of the effects of grape seed extract on menopausal symptoms found multiple benefits, including improvements in insomnia and symptoms of anxiety and depression. Animal studies have also suggested potential antidepressant-like effects.

While most research on pine bark extract initially focused on a single trademarked product derived from French Maritime pine trees called Pycnogenol®, recent research has found extracts from other pine trees to contain similar benefits. Like other polyphenol-rich compounds, pine bark extract appears to have anti-inflammatory and antioxidant potential. Its use in medicine stems back centuries, with documented references for use of pine bark in treating topical wounds and inflammation found in the writings of the ancient Greek physician Hippocrates.

In modern times, the research benefits and potential uses of the polyphenol-rich extract from pine bark continues to expand. Similar benefits have been found with pine bark as compared to other polyphenols, although there is stronger clinical evidence for helping to improve pain conditions, including arthritis.

A study in patients suffering from arthritic knee pain found that pine bark extract was more effective than placebo for treatment. Pine bark extract significantly improved an individual’s abilities to perform daily activities while reducing stiffness and pain. Pain scores showed a reduction of about one-third on average with pine bark supplementation over 14 weeks.

A separate trial on arthritis combined pine bark extract with mineral-rich red algae and compared the effects of supplementation to glucosamine. The pine bark combination outperformed glucosamine on pain reduction and improvements in physical function. To understand the mechanics of the treatment, researchers monitored genetic parameters in patients with severe osteoarthritis after pine bark treatment. They found that pine bark decreased the genetic expression of factors involved in the destruction of joints.

As might be expected, similar to other polyphenol-rich herbs, pine bark extract appears to have heart health benefits. A study in menopausal women found that supplementation with pine bark extract improved most menopausal symptoms. In addition, the extract reduced two inflammatory markers strongly correlated with heart disease, C-reactive protein, and homocysteine, by 60% and 43%, respectively.

In patients with established heart disease, it was found that pine bark extract improved endothelial function—the functioning of the lining inside the blood vessels and heart-related to blood pressure and blood clot formation. The effects appeared to be due to the antioxidant properties of pine bark.

Studies have explored some different potential benefits of pine bark extract on brain health, including its effects on attention-deficit hyperactivity disorder (ADHD). A study in children found reduced hyperactivity along with improved attention and concentration. The most recent trial found similar benefits with improvements in attention and impulsivity, likely mediated through increased antioxidant levels.

Another study, this one in healthy adult professionals exploring the mental health benefits of pine bark extract, also found benefits over placebo. Pine bark resulted in a modest improvement in memory, along with improvements in mood and anxiety. In addition, the performance on daily tasks was also shown to be improved. Other studies in healthy older adults, students, and those suffering from traumatic brain injury also found improvements in cognitive function with pine bark extract.

Polyphenols are potentially powerful health-promoting compounds found in numerous plants. Green tea, grape seeds, and pine bark are all rich sources of polyphenols, and there is growing evidence for clinical benefits. In general, polyphenols are strong antioxidants which is likely part of the reason for their benefits. As the research continues on these fascinating compounds we can learn best how to use them to support health and wellbeing.

This article was written by Dr. Scott Buesing, ND who has over 15 years of experience as a naturopathic doctor practicing integrative medicine. Dr. Scott Buesing has helped numerous patients improve their health. Over the course of his career, he has practiced collaboratively in a multidisciplinary partial hospitalization program for mental health and treated patients struggling with chronic pain at an integrative Southern California pain clinic.

Previous Article
We Make Melatonin From Serotonin: Here’s Why That Matters
Next Article
How to Make Sustainable Beauty Ingredient Choices

23,600 Views
Cinnamon is one of the oldest known spices.

102,408 Views
A healthy diet and supplements such as green tea extracts and omega-3 fatty acids may help reduce cholesterol and decrease your risk of developing cardiovascular disease.

9,243 Views
Minimize contact with harmful chemicals, especially in your home. A Naturopathic physician shares 3 tips for maintaining a clean home without toxic cleaners.